“Come on babe, we need to get closer! It looks like there’s a gap ahead.”

We pushed through the crowd and finally got within ear-bleeding distance of the stage. We arrived at the gap we had seen from some ways away, and were met with a small pond in the center of the concert ground. I guess we hadn’t added two and two when we went to this concert on a beach, and heard, almost incessantly along the way that, “the lake was up.”

We had become one with the lake. 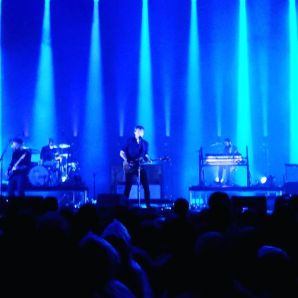 The evening was a Thursday in June and my partner and I had just seen one of my favourite bands, Death Cab for Cutie. Death Cab found their fame in the mid-2000’s, a time which I was unsurprisingly in high school. Why unsurprising?

The spiritual relationship between a person and music is difficult to put into words. Music, for most of us, represents something transcendent, the simultaneous embodiment and understanding of our soul by vocalist and band. Music makes us feel connected and understood, not only by the artists standing before us, but by each other. Some of the closest friendships and bonds have formed through collective belting of the latest punk song on the fringes of a bloody mosh pit. Somehow, you arrive at the conclusion that, this person gets me, based purely on the fact that they also didn’t mess up the end of, “Northern Lights.”

The point is, music, for many of us, represents identity, on an existential level, and our sense of identity begins to solidify as a teenager. Not a coincidence I love crappy mid-2000’s punk and emo, my father loves Deep Purple, and his father some old guy on a scratchy microphone.

The role of music in expression cannot be understated. Whether it’s singing, “What’s My Age Again?” in your 2001 Corolla with your friends, or tearfully singing, “Always,” to yourself in the shower, music allows us to understand, express, and manage our own emotions to a higher degree.

On a primitive level, we were built for this. The part of the brain that understands music is actually completely separate from the part of the brain that controls language. There are types of strokes where people who cannot communicate through speech find success in communicating through music. Late stage Alzheimer’s can often preserve the music centre, long after language has been coldly taken away.

This part of the brain also develops earlier in human development than the language centre. Instead of a chicken/egg phenomenon, the answer here is clear. Music came first! This may be why babies coos in musical tunes, long before they tell you, “give me that food!” The point being music, in humans, gets at something primal, ancient, and fundamental to our existence.

Do you have a favourite band or song that seems to bee your go to during times of happiness or sadness? Leave it in the comments!

Dr. Travis Barron is a resident physician in Toronto, Canada.